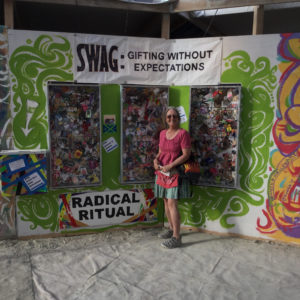 My name is Lorrie Bell, on the playa, I am Cookie.  In my professional life, I work as an educator.  I am an owner, director and teacher in a facility licensed for sixty children between the ages of 2 and 12.  The facility is in my backyard adjacent to a small farm which includes chickens, goats, pigs and lots of fruit trees.

I read about Burning Man initially in 1995 in an article published in a San Francisco newspaper.  Since reading that article I had a desire to attend Burning Man.  However, at that point it was only a dream, as I was a single parent with three children of my own, and sixty more in my backyard.   The last of my three children graduated from high school and went off to university in 2007.  I attended Burning Man for the first time in 2008 and I have attended every year since.  Before leaving for Burning Man my first year, a friend told me I should have something to gift to people that I would meet on the playa.  I thought about it for a long time, not knowing what a gift (aka swag) should look like.  I decided on small heart rocks that I was collecting.  I decorated them by wrapping a small amount of wire around them and then hand wrote Burning Man 2007 on the back of each one.  This was my art piece for Burning Man that first year.  I attended the event with the hope that people would appreciate my contribution.  In return, I was gifted swag from other people too.  It was so much fun.  We would talk about the swag and what each person’s swag meant to them.

When I returned to the default world, I had a small shoe box full of people’s expression of art (their swag).  I was taking a bit of Burning Man home with me along with many memories. These pieces were small, but were just as important to me as the big art installations that I saw on the playa.  I didn’t know what to do with the swag in the shoe box.   After attending Burning Man each year, I always returned with a shoe box full of swag.  After a couple years, I decided to make a shadow box with each and every piece of swag that was gifted to me.

In 2017, I displayed three 2ft x 4ft shadow boxes and another smaller one in center camp, along with the mailbox.   That mailbox received over 700 pieces of swag left for the newest shadow box.   Oh my! How should this display be done?

With a little help (or really a lot) from my friends, we developed an interactive shadow box which includes a cylinder that turns by a hand crank .  It has enough square footage to add three times the swag as the 2ft x 4ft shadow boxes from the previous years.  Check it out!

I have now developed this website, so you can see each piece of swag that is in the interactive swag shadow box of Burning Man 2017.

The future of this is yet to be seen! Each piece of swag means or meant something to the person that gifted it, and to me as the receiver.  Thank you for sharing a little bit of yourself with me.  I’m having so much fun with this project.